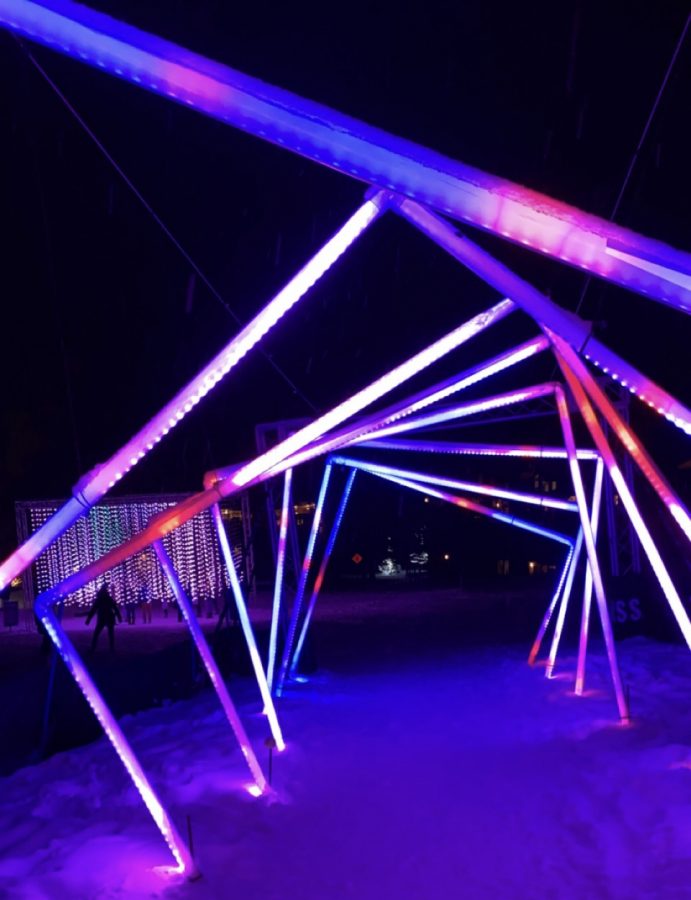 Snowmass Luminescence light show, in the middle of The Tunnel, with Submergence in the back

Due COVID-19 taking away Aspen’s yearly winter traditions, Snowmass put up an interactive light show, Snowmass Luminescence. Snowmass Luminescence has seven different exhibits including some interactive parts of the show.
Snowmass Luminescence opened on December 18, and will continue to run until February 28. The exhibit is split up into three parts. There is The Tunnel, Submergence by Squidsoap, and Prismatica by Raw Design in collaboration with Atomic3. The Tunnel and Submergence have been running all throughout the exhibit, while Prismatica opened on February 1.
The Tunnel is a walking path on the side of the mountain, which serves as an alternative to riding the Skittles Gondola in between Base Village and the Snowmass Mall. The Tunnel consists of five separate unique light installations. Each installation is programmed customly with its own five-minute light sequence.
The Tunnel is an immersive experience which is fun to walk through. Every tunnel has a different light sequence which makes each individual tunnel interesting. The different shaped tunnels throughout the exhibit make walking through them and seeing the colors in different ways very cool.
Submergence is a cube-shaped art installation. It is a walkthrough exhibit that consists of hanging lights throughout the whole cube. It goes through a 12-minute light cycle that literally immerses the visitors in light when they are inside of it. The lights are all around them, in every direction they look.
Walking into submergence, it is really interesting to see lights around you at 360 degrees. It is amazing to see lights hanging from everywhere, being able to walk around in it, look around, lay down, etc. The music in the exhibit is calming and the lights complimented the music well, putting on a show for the audience. The only downfall about this one is that the light and music cycle would go on and on doing the same thing over and over again, which made visitors lose interest after a while.
Prismatica consists of 25 moving prisms, each more than seven feet tall. Visitors can walk through and around them to see every color of the color spectrum, and even spin the prisms to see the colors move. The kaleidoscopes reach the best point of the installation. The way the light looks and the angle you view the prisms reflects all different colors of the rainbow.
The Prismatica exhibit is found to be the most disappointing. Visitors were able to walk through the other two and really be immersed in the experience, whereas this one is ignored in a way. Of course you could walk past them, look at the colors, and spin the prism to see what would happen, but at the end of the day it all just looked like statues that people would just walk past. The expectations for this exhibit were higher than what was shown because of the other two exhibits. People thought they would be seeing something different and interactive like that, but instead it was a ton of colorful boxes scattered around Base village.
Overall, Snowmass Luminescence is a new activity for the community, and it was visited and enjoyed by many, but it came up short in terms of expectations. The whole exhibit was “hyped up” a lot, and it just wasn’t able to live up to those expectations. It’s just a walk through of changing colored lights, which is good for pictures, but nothing more. It was very pretty to look at, but at the end of the day there wasn’t anything new and exciting about it other than it being here in the valley.