Boys hockey slap shoots their way into the new season 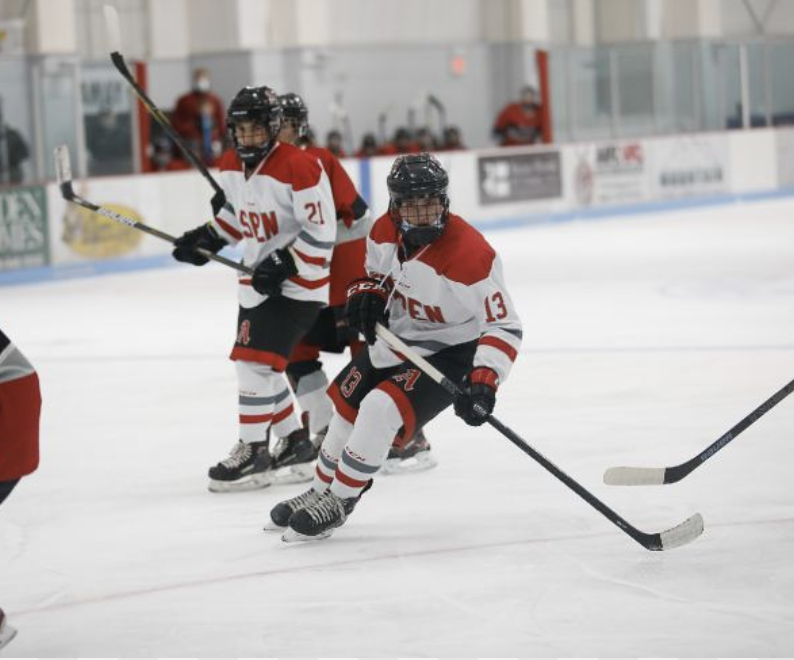 Despite the challenges that COVID-19 brought, the Aspen High School boys hockey team has been practicing even before their season started. The high school season has officially started, and the team is thriving under the circumstances.
The AHS boys hockey team lost 14 seniors from the varsity team last year, meaning the team largely consists of players new to the high school team. Their season started on January 18th, and since then the team has played five games, winning one of them. They still have about 10 more games to play throughout the season.
Seniors, Keaton Miller and Connor Allen are excited to see what’s to come for their team, even through the hardship of not being able to practice and play as much as they are used to has been a setback for them.
Even though the boys hockey team is relatively new in terms of the people on it, it is similar to their club team. Most of the boys have been playing together since they were about five years old, and are looking forward to seeing what they can do with this team.
“This team has one of the best inter-team relationships out of any teams I have played on throughout my sports career,” said Allen.
Throughout the past few months, with COVID-19 being an avid struggle, the team has still maintained a good team chemistry. The team is committed to the same goals, and it has been exciting for the team to see what they can accomplish.
“While there are restrictions put in place that limit some of our practicing capabilities, it has been great to see most of the team on the ice and developing as a whole,” Miller said.
Despite the struggles the boys hockey team has gone through to be able to practice and play over the past few months, they were one of the lucky teams that were able to practice throughout the pandemic.
“We have been placed on quarantine twice which took away about a month of practicing, as well as having our scheduled pre-season games cancelled. However, after the quarantine we got back to our normal practice schedule,” said Miller.
Aspen High School boys hockey coach, Keith Howie, was contacted to discuss the team as well, but failed to respond to multiple interview attempts.