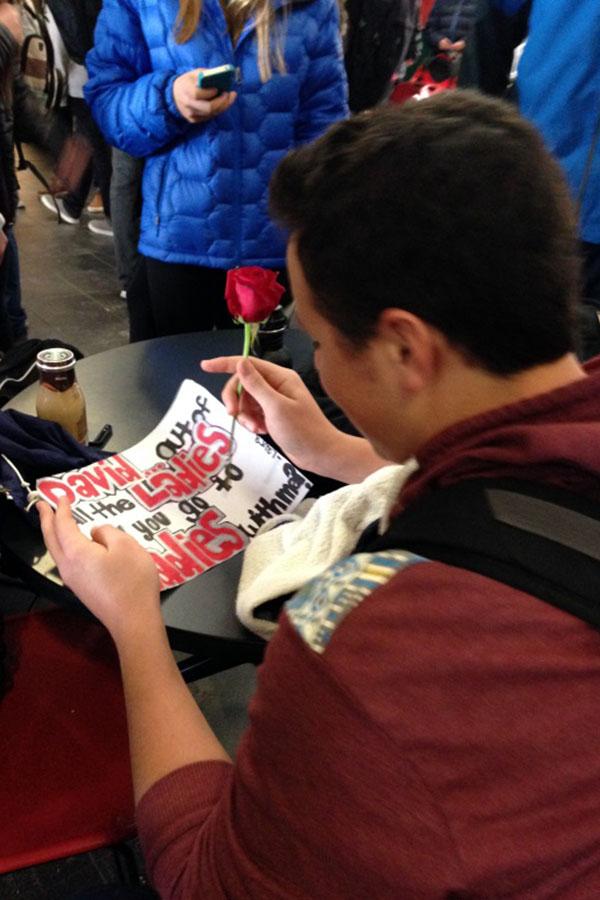 Sophomore David Mondry reads a sign inviting him to the dance. “David, out of all the ladies, I want you to come with me to Sadie’s.”

In the famous words of Queen and David Bowie, I was under pressure, and far too much pressure pushing down on me. I could feel the words I had planned to say choking up in my throat and the pit in my stomach growing steadily larger. I had spent the night coming up with the most creative way I could think of to ask this boy to the Sadie Hawkins Dance, but as I approached him, I kept wondering, “Why didn’t I just go for something simple? Why did I feel the need and the pressure to perform this outlandish gesture?” There were hundreds of eyes focused intently on me, but I decided that there was no time like the present, so I decided to go for it. Hands shaking, words quivering I recited the words I had rehearsed thousands of times in my head, “Tyler, will you go the Sadie’s Dance with me on the day that pigs fly?” To which he responded by opening a large box of pink helium balloons with pigs drawn on them, indicating a yes.

Now as a sophomore, I have never had this experience before, and neither have most girls, seeing that this is the first Sadie’s dance to occur at AHS in a long while.  But boys at AHS and schools around the country have been asking girls to the prom for over 50 years. At first the ask was a simple, “Hi, would you like to go to the prom with me?” But nowadays there is a certain standard that must be met in order to acquire a date.

Even I can speak to the truth of this statement. In my frantic attempt to ask this boy to the Sadie’s dance, I was told several times over (by my friends, by him, and by my family) that my ask had to be “good” and that it couldn’t be unexciting. The problem was that no one ever defined “good”.  What is wrong with simply walking up to a person and asking them directly with a rose? When did classic become outdated and lame?

I don’t want to sound hypocritical, because even if I were to be asked to a dance, I would want the big ask as well.  The idea of being asked in public isn’t more romantic by any means, but it reliably calls attention to one’s self. People, especially high school students, want others to know that they have a date. They want them to know that someone asked them. This idea of a big ask, however, can discourage the perhaps more introverted members of our high school society from asking. As a society, we walk a thin line of making the big ask important, while we run the risk of making it overrated.