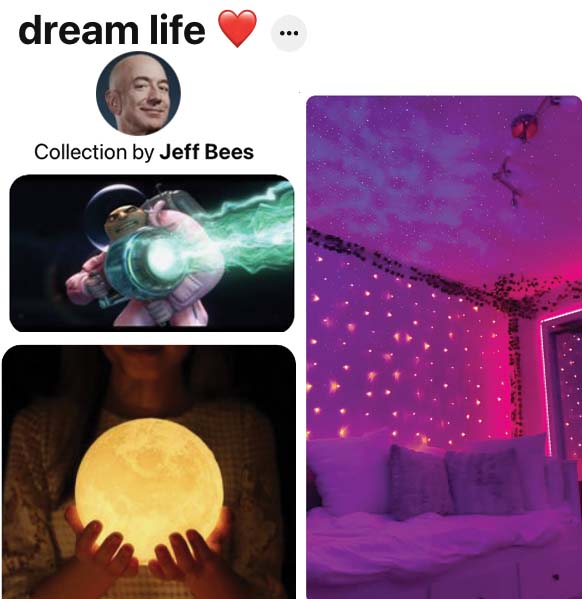 Jeff loves using Pinterest to get inspiration for room decor.

SATIRE — Jeff Bees, the founder of Amazin’ and Green Origins, is reportedly planning his biggest venture yet, to catch one of the most iconic objects in earth’s sky: the moon.

Bees’ motivations for the project are unclear, but many speculate he has ambitions for space tourism, an industry which has recently gained momentum. However, Bees stated that his interest in interior design sparked the idea.

“I’ve been going for more of a rustic theme in my home, but I think I wanna explore the futuristic aesthetic more,” Bees said, his eyes suddenly glazing over with a wistful look. “Imagine, the moon with some blue LED lights. It would be just like my Pinterest boards…”

Bees had planned to enlist the help of Felonious Gru, aka “Gru”, world-renowned inventor of the Shrink-Ray. However, Gru said he was “concerned” about Bees’ plan, and refused to participate in the mission.

Following Gru’s refusal, Jeff Bees was seen punching a hole through his wall and reportedly listened to “Traitor” by Olivia Rodrigo for a record-breaking 10 hours.

“Come ON! Gru literally sucks,” Bees was heard shouting, and later tweeted, “What is a dumb, stupid man!! Everyone knows the purpose of life is money. WTF is wrong with the world :(”

However, Bees is feeling better after receiving his monthly Employee Mistreatment award, and has now unveiled a self-piloting system to achieve his mission.

“Our engineers designed an innovative, fully electric rocket that is actually 55% more efficient than that old crappy Shrink Ray,” Bees said, amid cheers from a large audience. “It’s the rocket of the future, one that we’ll also use to capture mars, jupiter, and finally, the sun!”