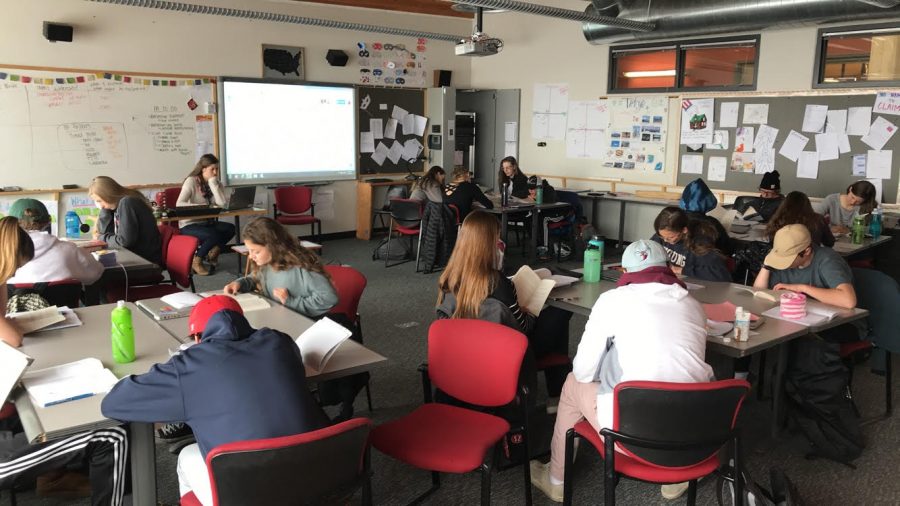 *This article was originally published in The Snowmass Sun on May. 31, 2022.

Aspen School District is not the only district in the country facing teacher shortages as schools across the nation are struggling to find available staff to fill gaps in teaching positions.
Still, the district has faced challenges with teacher retention and replacement this year. Data from an April 29 email from district Human Resources Director AmyLittlejohn indicated that the elementary school had six departures across both certified positions (like teachers and counselors) and classified positions (like paraprofessionals and office workers).
The middle school had 14 departures and the high school had seven departures at the time, The Aspen Times previously reported. (Those numbers were subject to change as the school year wrapped up.)
Some educators have expressed concerns about the impact of that turnover and staffing shortages throughout this year. The challenge lies in part in hiring replacement teachers and finding substitutes.
As of May 22, the middle school had a total of 14 open positions, including 10 certified positions, two classified positions for educational support staff, and two athletics coaching positions, according to its job listings site. The high school had five certified positions, one classified and four athletics positions posted. The elementary school had two certified positions open. Across the district there were 45 unique listings for different positions; some open listings had been posted as early as last fall and one was even had a posting date from April of 2021.

According to AHS principal, Sarah Strassburger, a possible solution to the problem, at least in the short term, could be reallocation and hiring one teacher for multiple positions.
At the end of the 2022 school year, Aspen High School lost two world language teachers. One Spanish teacher, Joseph Dziedzic, got his dream job with a baseball team in Arizona, and a French teacher, Eric Lamb, said he is moving to Roaring Fork High School to help his community and teach in the same district as his son who is just starting kindergarten.
Lamb was partially involved in hiring his own replacement and reorganizing teachers to fill his position. One option that Lamb suggested was that instead of hiring a replacement for Lamb, Aspen High School could shift other world language teachers to fill that position and reallocate some of their duties to another new Spanish teacher so everyone gets a little more work, but no one teacher has to fill in. Both positions could then be filled by only one teacher.
“Jane [Larsen], for example, who teaches French and also teaches our English language learners support classes and instruction classes,” could be a fit for that concept, Lamb said, “So we’re looking to hire a Spanish teacher who can do both Spanish and teach English, which would mean that Jane could do more French and less of the teaching English, so there won’t be another full-time French teacher hired,” Lamb said.
With the entire job market for professional educators struggling, being able to fill more positions with fewer people can be a solution in the short term. Lamb also heads the Advanced Learning Plan Program at the high school. The program helps gifted students further their education and make sure they are challenged sufficiently. Lamb has been helping students in that program create learning plans that made sure they would be getting the best learning experience they could. Another teacher also leads the program at the middle school, but they seemed to be already quite busy with their other classes, according to Lamb.
“The woman who is doing it at the middle school, she seemed overloaded and I thought, well, why don’t they just make it (a) full-time position and spread it over the high school and middle school and we’ll have some continuity,” Lamb said.
AHS actually lost fewer teachers this year than in years prior according to Sarah Strassburger, but the district has a harder time hiring than many other districts because of several factors. There is a smaller applicant pool and housing is a larger problem because of the sheer cost of living in this valley, among other things. The district has put out marketing videos and even put an ad in Outside Magazine with the aim of attracting teachers to live in Aspen as well as work at Aspen High School. The district also recently bought more properties in the valley. Housing is likely a significant limiting factor for teachers as rent in the Roaring Fork Valley is too high for a teacher’s salary. However, the Aspen School District owns a lot of property and continues to acquire more as part of a $114 million bond initiative.
“The idea is to offer people housing with a subsidized rent so it is below the free market. The free market is out of control for teacher salaries,” Strassburger said. “We have some homes in Snowmass, we have some in Woody Creek, we have some in old Snowmass and Basalt so there’s kind of a variety and there are a variety of sizes. And we’re hopeful that that will help bring people here.”
Substitute teachers are another beast to tackle. Aspen High School was impacted most by a substitute shortage this winter when there sometimes were far more unfilled substitute requests than filled ones. And currently, the substitute pool is very limited, according to David Clarke, a long-term substitute at the high school. He estimated that there was just one substitute who wasn’t a long-term sub, “and that’s about it,” he said.
When multiple teachers are out it is difficult to have a teacher in each class. Currently, the main focus of the district is to ensure that the schools keep functioning. Having one teacher checking in between multiple classes or having regular teachers substitute if they don’t have a class during that period is a short-term solution to the problem. Students still need a teacher in class, and having regular teachers sub is one of the only solutions right now. What really needs to be done is to make pay better for substitute teachers and increase benefits to encourage more people to join the field of education.