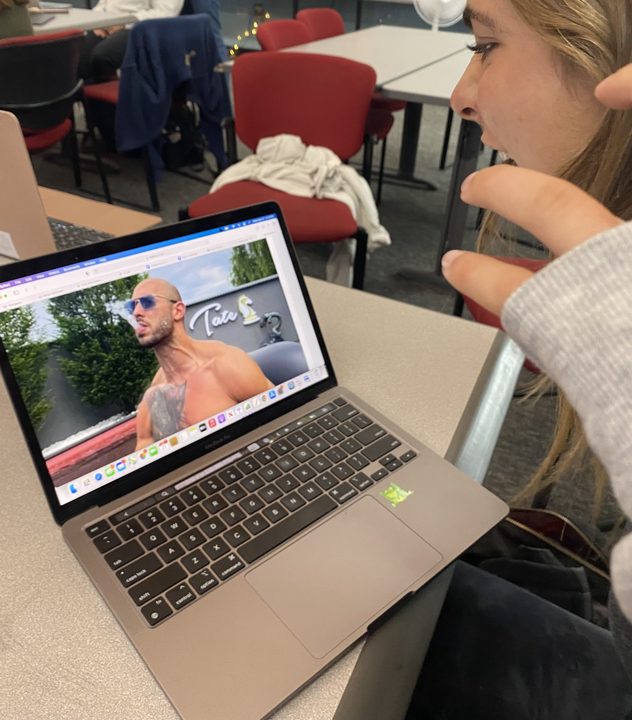 In today’s society, we see a rise in the use of social media primarily by the teen population.: surveys by The American Society of Child and Adolescent Psychiatry (ASCAP) that ninety percent of people aged 13-17 use social media. While there are some pros to social media, the widespread impact it has on teenagers today can be a challenging perspective for parents.

Andrew Tate, a widely known British-American kickboxer and influencer, is just one example of a negative influence. Tate was recently banned from social media sites, such as Instagram and Facebook, after his rise to fame spewing offensive views toward women. Tate’s misogynistic beliefs include referring to women as “his property,” and even stating that women should “bear some responsibility” for getting raped.

Tate blew up on Tik Tok after his podcast “Tate Speech”, where he shared his personal views, caught the attention of many teens. His views center on the idea of “bringing back” traditional masculinity, and influencing young men to commit harm to women outside social media. While Tate has been banned from many platforms for sharing his sexist views, Tik Tok was slow to put a stop to his content and did little to nothing to stop him from radicalizing young men.

Tate has been known to say blatantly misogynist things, such as, “When I speak to some of these feminists who’re like ‘I don’t want kids,’ I think you are the most miserable stupid b*tch in the world.” His beliefs leave women feeling objectified as though they are a man’s property, by saying things like “I think the women belong to the man.” Tate has also spoken up on his opinions of male masculinity. “Nobody would choose to be a small weak guy who has to cry when he gets upset,” Tate said on his podcast.

With his presence on social media, Andrew Tate had over 4 million followers on Instagram before his account was banned. Tate also has a podcast where he regularly speaks on misogynistic topics. While social media has infiltrated our world and given us many advantages, we have people in this world that choose to use it carelessly. That’s why it is important for the teens constantly exposed to harmful posts to help platforms in stopping inappropriate, and dangerous creators from causing harm to young audiences.