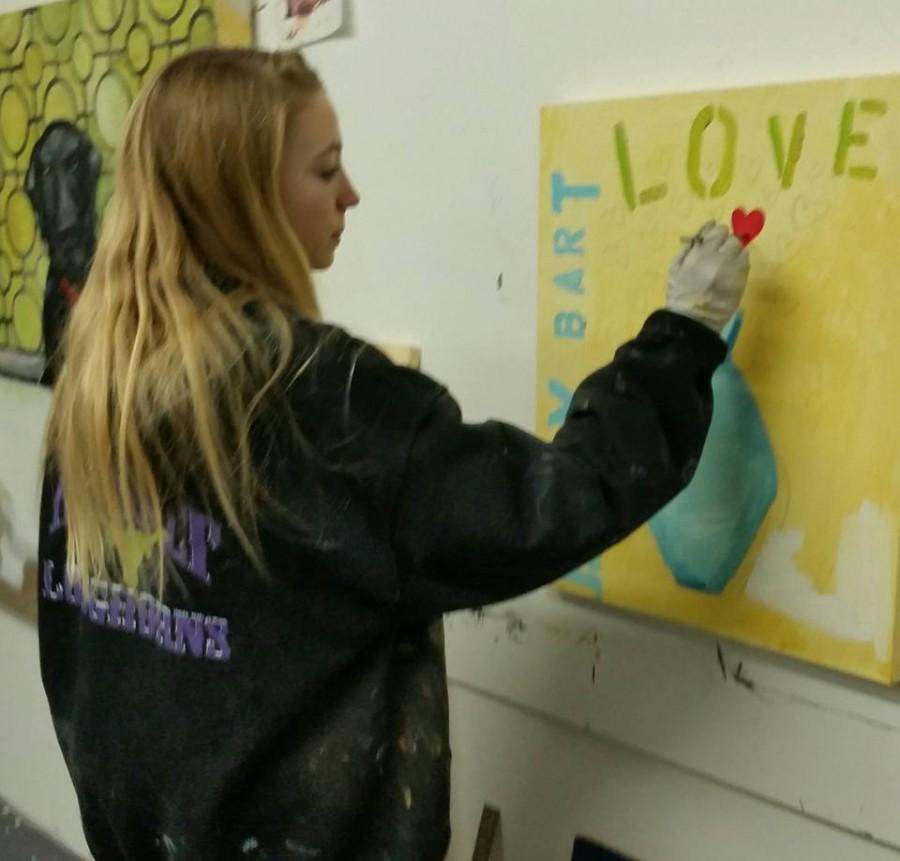 When AHS freshman Lily Royer started her card business Lilybart last year, she never imagined that it would grow past a small number of stores in the Roaring Fork community. However after the passing of one year, Lily’s cards are sold at over 30 stores valley wide, and are currently in the process of being picked up by Whole Foods. It was an unimaginable growth, said Lily, especially for only one year.

Royer, who was diagnosed with cystic fibrosis before her first birthday, and her mother, Elana Royer, had the idea for lilybart when Lily was hospitalized for appendicitis and a collapsed lung. While enduring a tough week in the hospital, Royer’s little brother William sent her a card decorated with vibrant pink hearts. Inspired by this, Lily and her mother, with the help of Lily’s father who owns a printing business, made the decision to start a production that would not only be a creative outlet for Lily, but also raise funds and awareness for cystic fibrosis, which does not yet have a cure. With help from friends and family, the business was soon up and running, with William’s card as their first piece. Throughout the past year, Lily has mentored with artists around the valley, and created cards of many different styles. To Lily, card making was a productive outlet.

“Painting and learning from these artists helps take my mind off of my medicine, and my breathing. It’s a kind of distraction; when I’m working with an artist, most of that fades away,” Lily said.

Lily’s sister sees the card making business not only as a creative outlet, but as a way for Lily to take her health into her own hands.

“Lily is a hands on Type A person, so not being able to have control over her health is really hard for her, so taking charge of Lilybart allows her to take a bit of control over C.F., which is really good for her,” Lily’s older sister and AHS senior Avery Royer said.

Over the course of the past year, Lily has developed her card business by working with various local artists such as David Jungquist, Charles Andrade, Tori Campisi, and many more in different mediums.

“It’s been really fun working with so many artists. Every artist is so different. It’s interesting to learn their different skills and techniques,” Lily said.

After seeing their success within the valley, Lily and Elana have set goals to do shows and expand business to outside the valley, possibly reaching as far as Arizona or New Jersey. The family has a system in place, where Lily does art for the cards, Elana manages all business, and her husband handles the printing back in New Jersey. As they see it, the cards can be distributed anywhere. Additionally, Lily hopes to expand her repertoire and work with artists outside of the valley.

“This spring, I’ll be going to New York with my aunt. I think I’ll be working with one, maybe two artists there and I’m really excited,” Lily said.

When starting out, Lily said that she had no idea how successful Lilybart would become, but she attributes her success, in part, to people’s interest in her story and their desire to help.

“With every card we have a little place on the back that it tells my story,” Lily said. “Anytime the card is sold, that one person gets to read about my journey. And I think that’s a big part of it. It’s not just going out to the store and buying this Valentine’s Day card; it’s going out there and knowing you’re helping someone with their disease. That’s the overall goal. To reach out to other kids, only kids with CF as of now, but our eventual goals are to reach out to everyone.”

**Lily’s cards can be found at many stores around the valley, or on her website Lilybart.com