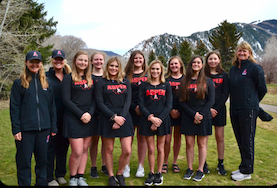 As the lifts have stopped spinning in Aspen, spring sports have come into full force, with renowned programs such as Lacrosse and Soccer taking the attention of the school and community. However, in addition to the more popular sports, other teams have begun their seasons as well, with new developments, such as the Girls Golf team. Despite the team’s relatively unknown presence, new coaching and advocating for the team has to lead to Girls Golf becoming more prominent at AHS.

Martha Richards, the Athletic Director at AHS and new head coach of the Girls Golf Team, believes that the team is heading in the right direction this season.

“I always look at my job, as a coach, to come in and enhance, and build on what was done beforehand. Therefore we are practicing a little more than previous years and we have been able to work on some things in a different way thanks to my 20+ years coaching at the Division 1 level, and fully understanding that I have to take what I taught those D1 golfers and transfer it to this team. So what I’m really trying to help the kids with is becoming brilliant at the basics,” Richards said.

In addition to improving the athletic/skill-based aspect of the program, Richards is also looking to help the players improve mentally.

“I’m working on getting them comfortable with asking more of themselves, and it has been really fun to watch them step up and begin to learn new things about golf and also about themselves which is ultimately my goal,” Richards said. “I want golf to help them learn about themselves, and to become stronger and more resilient.”

AHS Senior and varsity golf player, Zoe Guthrie, feels that due to new coaching and restructuring of the program, the team is heading in the right direction.

“Our new coach this year, Martha Richards, has really helped our team evolve into where we are now, thanks to her collegiate coaching experience and her increasing the structure of the team,” Guthrie said. “I feel that that the team is now getting more recognition and we have a more diverse group of girls on the team from different grade levels. Overall though I think the program is heading in the right direction and the rest of the girls on the team have improved a lot since they first started as well and hopefully, it will keep growing after I leave.”

Julia Higdon, a Junior at AHS, is grateful for the development of the girl’s golf program and hopes that the team will continue to grow in the future.

“I feel that the girls golf program has changed a lot thanks to the new coaching staff which has given all of us a new perspective on teamwork within the game itself, and in terms of practices they have become more structured and well rounded as we do things like strength and conditioning and overall focus more on technique,” Higdon said. “In the future, I would like to see more players from the younger grades like freshmen and sophomores so we can have a larger team and so that the team will continue to grow after we graduate.”