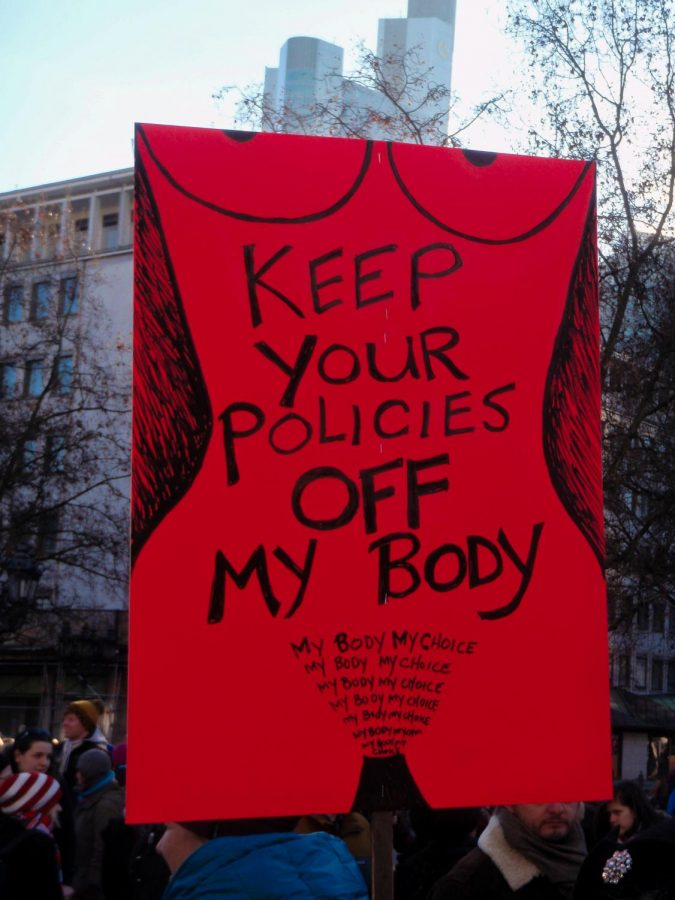 It’s just like every other day, but today you are pregnant. At the doctor’s office you are given three options: either keep your child, set up a planned adoption during the pregnancy, or give it to a foster care system after the child is born .

Suddenly, your state representative, a 59-year-old part-time businessman, walks in and tells you what he thinks you should do. If you choose abortion, you and your doctor could be charged with murder.

This is Alabama, Georgia, Mississippi, and a dozen other states who have recently passed laws that restrict a woman’s access to abortion. It’s not about children anymore, it’s about the continuous control men have over women. Why do men have a say in what women do with their bodies? It’s not like they have a uterus or anything. But unfortunately, the control men have over women has lasted since the beginning of the human race. As a result of that need for control, not only have Georgia and Alabama criminalized abortion, but they have imposed life imprisonment and the possibility of the death penalty for women who obtain abortions or even miscarry. The HB 481 Law in Georgia states that a fetus should be treated as a full person from the moment of conception and that they deserve “full legal recognition.”

“Full legal recognition” means that a fetus is recognized as a natural person, according to state law, and anyone who harms the fetus could be charged as they would for any other crime against a person outside of the womb. Currently, this “full legal recognition” law is not in place and will not be enacted until January of 2020. There’s potential that this law will be challenged in court and possibly overturned.

The biggest threat the Georgia law imposes is that women who miscarry may be dragged into a criminal investigation. Those who think the idea of police investigating miscarriages is a hoax would be surprised to find out that it already happens. In 2016, a woman who miscarried two fetuses at 24 weeks was charged with “abuse of a corpse”. This is categorized as a Class C felony that has a 3-10 year prison sentence in Arkansas. Today, she is still awaiting trial and is on a $50,000 bail.

Before Roe v. Wade passed in 1973, these situations were common. However, today, the abortion bans that are currently happening seem like a horror film. Banning abortion will not only put more kids into the foster care system, but their kids could also be put into the system as well, therefore repeating the cycle. In Georgia, unwanted pregnancies cause thousands of kids to be put into foster care. Over 700 kids in Georgia age out of foster care every year having never been adopted. 51% of them are unemployed five years after aging out and 43% end up homeless. Also, over 50% of the girls who age out of foster care get pregnant and have children who also end up in the foster care system, thus repeating the cycle.

It’s important to remember that, despite the pro-life idea that the minute an egg is fertilized it should be considered a full child, one out of four confirmed pregnancies ends in a miscarriage before 20 weeks. Still, more miscarriages happen before a woman was even aware she was pregnant. Can you imagine being charged with the killing of a fetus every time you miscarry, because this new law in Georgia will lead right to that. Not only is this new law cruel, it puts women in danger of unfair treatment and unfair prosecution. This new law would only cause women, if they’re seeking an abortion, to move or travel to other states where abortion is still legal.

These horrific events remind us that people believe every other aspect of a woman’s life is less important than the incubation of children. In fact, it seems like Georgia, Alabama, and several other states do not think women matter at all if, for any reason, they choose not to carry children to term. If we don’t do something now, Roe v. Wade could be reversed, putting women’s rights in jeopardy. Abortion is pro-life because by supporting it, you prevent thousands of deaths per year from childbirth, slow the rate of children being placed into foster care, and allow a women to abort a child that she was forcefully impregnated with. It’s up to you to call your state representatives, post on social media, and speak up about being pro-choice. Women’s rights are on the line.