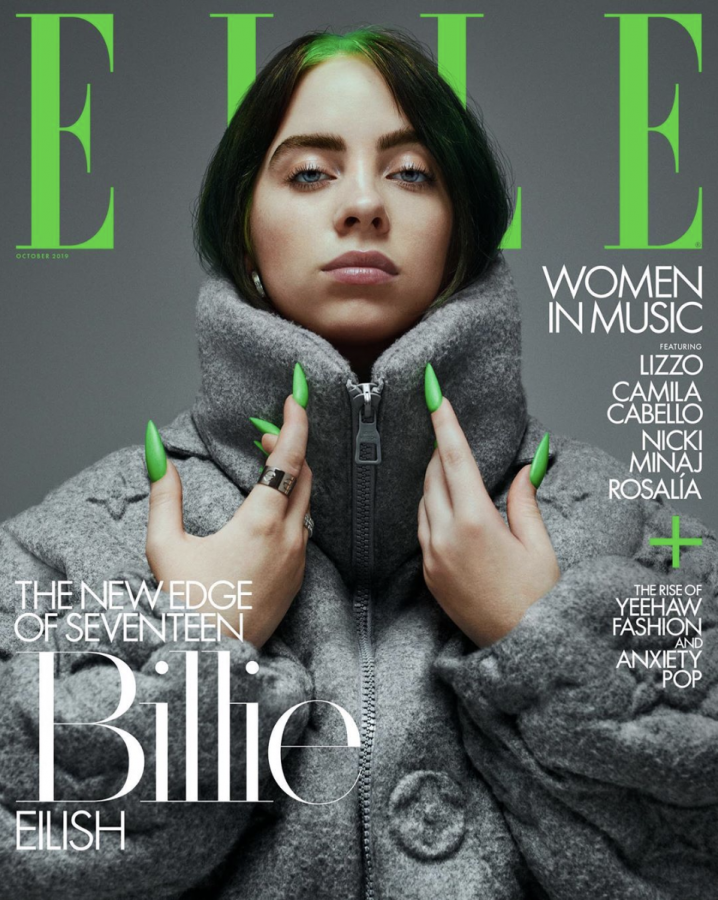 Coverage of Billie Eilish as a young aspiring fashion icon and musician.

Billie Eilish is the new face of Gen Z and has become a global impact on teenagers and young adults. Through her fashion approach, musical successes, and musical style Eilish has advocated for change against global controversies. Similar to Greta Thunberg, Eilish uses her age and passions to advocate for the issues she wishes to address. Though many believe that her behaviors are a call for attention, too dark, or based on popularity, Eilish has turned into a role model for people mostly in the US, however, also in Asia, Europe, and South America.

Eilish’s fashion is one of the most controversial pieces of her identity. Her baggy clothes, dyed hair, impulsive colors, and accessories serve as a questionable and contrasting view on fashion, specifically for females. The images painted for women’s fashion relates to scandalous and sensual characteristics that align with being a “girly-girl.” Often women have been seen as subservient in social or vocational relationships\; however, Eilish strives to change that. She has demonstrated her worth in society while maintaining an identity contrary to the ‘typical’ woman.

Caprice Seeman, a junior at Aspen High School, listens to Eilish on a regular basis and admires the messages she tries to send.
“I think that through her music and fashion Billie relays the message that you should show who you are and not shy away from that because you are in front of a crowd,” Seeman said. “She is unique and therefore she is showing everyone that it’s ok to be different.”

In a Calvin Klein advertisement, Eilish’s message was “nobody can have an opinion because they haven’t seen what’s underneath.” Whether she is protesting against body shaming or simply protecting herself is up for question, however, Eilish has demonstrated the possibility of success through insecurities that many other teenagers relate to.

Similarly, Eilish uses her lyrics and tone to identify common issues within society. Her songs can be characterized as dark or subtle while her lyrics incorporate strong societal views such as the expectations and standards that all people are held against.

Connor Gagen, a junior at AHS, is not a fan of Eilish, however, he believes that the fashion icon that Eilish has become goes hand-in-hand with the music she produces.

“She talks about the social pressure from beauty standards and how teens are especially vulnerable,” Gagen said.

In one of Eilish’s songs, “idontwannabeyouanymore,” from her recent album, the message of the pressure of beauty standards are addressed through the shift between having an image to fulfill and no longer fulfilling that. In the lyrics, the image most often correlates to that of a model – a person is seen to be nearest to perfection in society – and Eilish then speaks on the insecurities that form when people cannot fulfill that role.

Through the lyrics of her other music, Eilish provides different critiques but often ends with the same message. Liam Farrey, a junior at AHS, likes some of Eilish’s music but doesn’t consider himself a fan.

“I think that the message she is sending is to be different from others and to be yourself,” Farrey said.

Between her unique music, particular taste in style, and her huge impact on all of society, Eilish has demonstrated the qualities of being an individual and the successes that come from being true to one’s self. Though her personality may not be for everyone, Eilish battles common insecurities and isn’t afraid of the view of society. She uses her passion to advocate for her beliefs and forms a life suited to her own needs. She is an ideal role model, especially for younger women, however, her actions must be taken in the token tailored to one’s self rather than identical to the life of Billie Eilish.