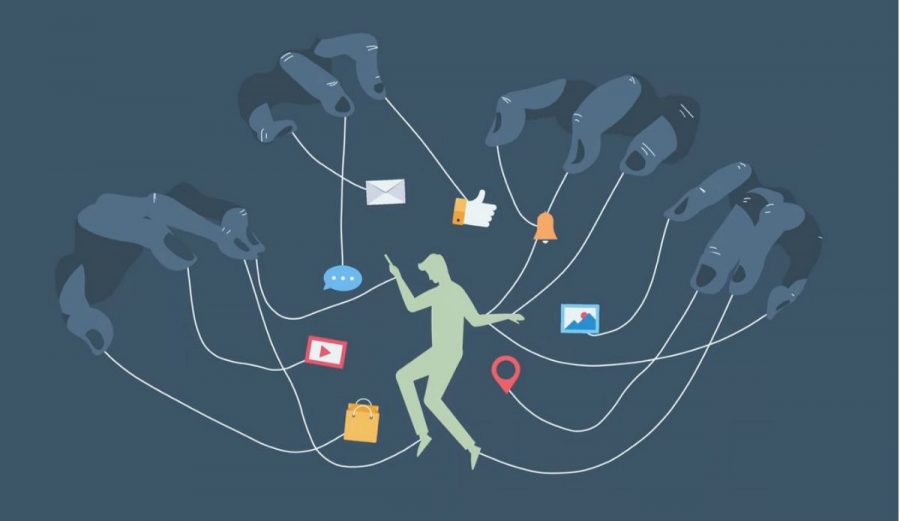 The puppet masters of social media controlling their puppet (the public).

The quote “Nothing vast enters the world without a curse,” by philosopher Sophocles was the first thing viewers of Netflix’s new documentary, The Social Dilemma, saw. And this quote could not be more relevant to technology. The documentary features multiple tech experts and former employees of big technology companies alerting the public on the issues with technology and social media.
Social media has made Generation Z, kids who grew up entirely with social media in their lives, vastly different from the generations before them. Gen Zers have higher levels of depression, anxiety, and other mental health issues than ever recorded. Since 2009, suicide rates for girls aged 10-14 has gone up 159%, while suicide for ages 15-19 has gone up 70%. Social media became available on mobile phones in 2009. Gen Zers are less likely to take risks as well. In the documentary, an expert stated that studies have found that fewer girls are getting their driver’s licenses, and most teenage girls now have never been on a date, and this is linked to social media. Social media is significantly harming young people’s self-esteem and mental health. But there is no easy way to get out of it.
Tristan Harris, a featured ex-google employee, now works to bring people’s attention to the problems with social media.
“If something is a tool, it is just sitting there waiting to be used. Technology lures you in, seduces you, it demands things from you,” Harris said in the documentary.
The Social Dilemma illustrates why the business model for technology is unethical and why that affects so many of today’s youth. For apps such as Facebook, the revenue comes from selling ads. The product that social media companies are selling is your attention. Their goal is to keep you on the apps, engaged for as long as possible. This is what makes social media apps business models unique: you are the product.
Social media apps work by gathering data on who you are, what you like, what you dislike etc. The algorithms then use this information to customize what you see on the apps. For example, if you start looking up dog collars for sale on the internet, then you might start to see ads pop up on your Instagram for dog products. Or if you like videos of stand up comedy, then you will get more comedy videos suggested to you. These apps have created the ideal platform for advertising, which is why they are so wealthy.
One of the biggest consequences of social media is its influence on politics. Because what each person views is customized to their interests, each person is presented with their own set of facts and information that changes the way they see the world. You might look at another side of politics than you and think, how are they so stupid, how are they not recognizing the facts I see? It’s because they aren’t getting those facts. When the goal of the app is to keep your attention, there is no motivation to make sure that everything is factual: fake news is more entertaining. We accept the reality which we are presented with, and when everyone in society has a different reality, there is no way to compromise.
“How do you wake up from the matrix when you don’t know you are in the matrix?” Harris said in the documentary.
As a teenager, it’s not realistic to delete social media even if it’s hurting you. Snapchat is how everyone communicates and makes plans, Instagram is how teenagers show their lives and keep in touch with each other, Tik Tok is where most cultural trends for Gen Z start: teenagers won’t just take themselves out of the society and choose to exclude themselves. Online communication is now a priority over in-person communication.
It should be the responsibility of tech companies to alter their business models to create ethical businesses. Tech companies need regulation. Every other industry in the market has regulations on it, rules that protect society from being taken advantage of. But, social media companies have no accountability even though they are greatly influential in people’s lives.
The former president of Pinterest, Tim Kendall, states that the social media business model is flawed.
“We live in a world where a tree is worth more dead. A whale is worth more dead even though we know it is bad for the planet. We go along the religion of profit at all cost- short term thinking. Now hopefully, the last straw is that the most valuable thing nowadays is our attention. Us staring at our screens rather than living a rich life,” Kendall said.