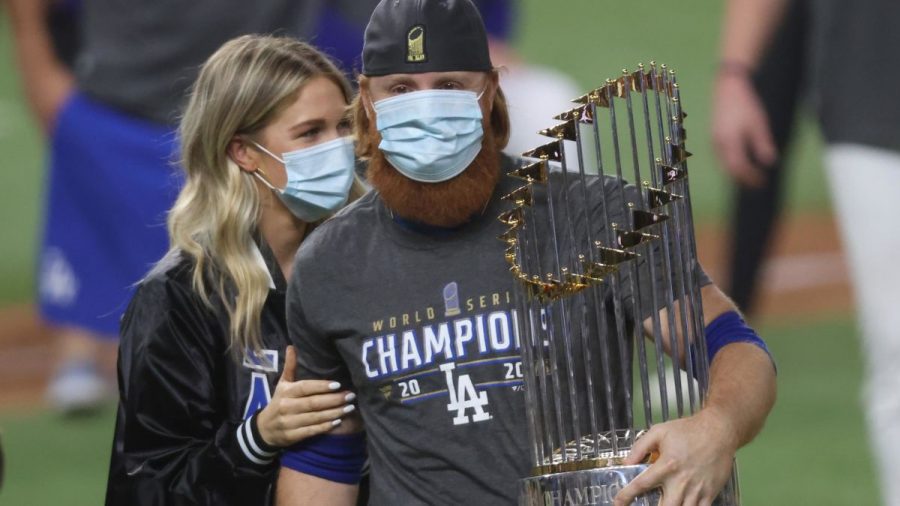 On Tuesday, October 27th, the LA Dodgers won the Major League Baseball world series for the first time in 32 years. During the postgame celebration, third baseman, Justin Turner, ran out to embrace his teammates, take team photos, and proudly hold up the team trophy despite testing positive for COVID-19 only moments earlier.

During the sixth inning of the game, MLB got a call from the Dodgers’ COVID testing lab that one of their players, Turner, had an inconclusive test result. While inconclusive test results aren’t uncommon, they may replicate characteristics of a positive test. The lab conducted further testing to get definitive results, and called MLB again once they had a confirmation on the test. Turner remained in the game until the seventh inning when the lab called a second time and confirmed that Turner’s test was indeed positive. Turner was then removed from third base.

Turner was asked by league officials to isolate, and remain in isolation after the game. Despite this, Turner ran out to embrace his team after their win against the Tampa Rays. He wore his mask at times over his mouth and nose, but occasionally pulled it down to only cover his chin. Turner neither socially distanced from his teammates, nor properly wore his mask for the entirety of the postgame celebration, putting many others at risk for contracting the virus.

On Wednesday, MLB stated how they feel about Turner returning to the field and celebrating with his teammates after testing positive for the virus.

“It is clear that Turner chose to disregard the agreed-upon joint protocols and the instructions he was given regarding the safety and protection of others. While a desire to celebrate is understandable, Turner’s decision to leave isolation and enter the field was wrong and put everyone he came in contact with at risk,” MLB said in a statement.

Turner himself tweeted an hour after the game saying “I feel great, no symptoms at all.”

Based on what is known about COVID-19, one can contract this virus and still be asymptomatic. The virus can still spread regardless of the symptoms, and both teams faced the repercussions of Turner’s “disregard” of the COVID-19 protocols.

Travel was delayed for both the Dodgers and the Rays team, and all members of both teams had to undergo nasal-swab testing on Tuesday after the game, and the following morning. The teams remained isolated at a hotel in Dallas throughout the testing process, and after the second round of testing, one Ray’s family member tested positive. The players cleared traveled to their home cities to quarantine for safety measures, and those who tested positive, including Turner and his wife, were to remain isolated.

MLB’s commissioner’s office has begun a full investigation into this matter. The league is looking into how Turner was able to return to the field to celebrate, as well as what the source of the virus could have been. Given the two infections so far, a likely source could be the hotel both teams stayed at. However, the investigation has not yet found the initial source of the virus.
The Dodgers’ manager, Dave Roberts, was interviewed on the field after the game. Roberts himself was puzzled at the events that had unfolded that night.

“He tested positive, and I don’t know if it’s a false positive. I have no idea…He was in the team picture. I didn’t touch him, just because I didn’t know, but it was really crazy,” Roberts stated.