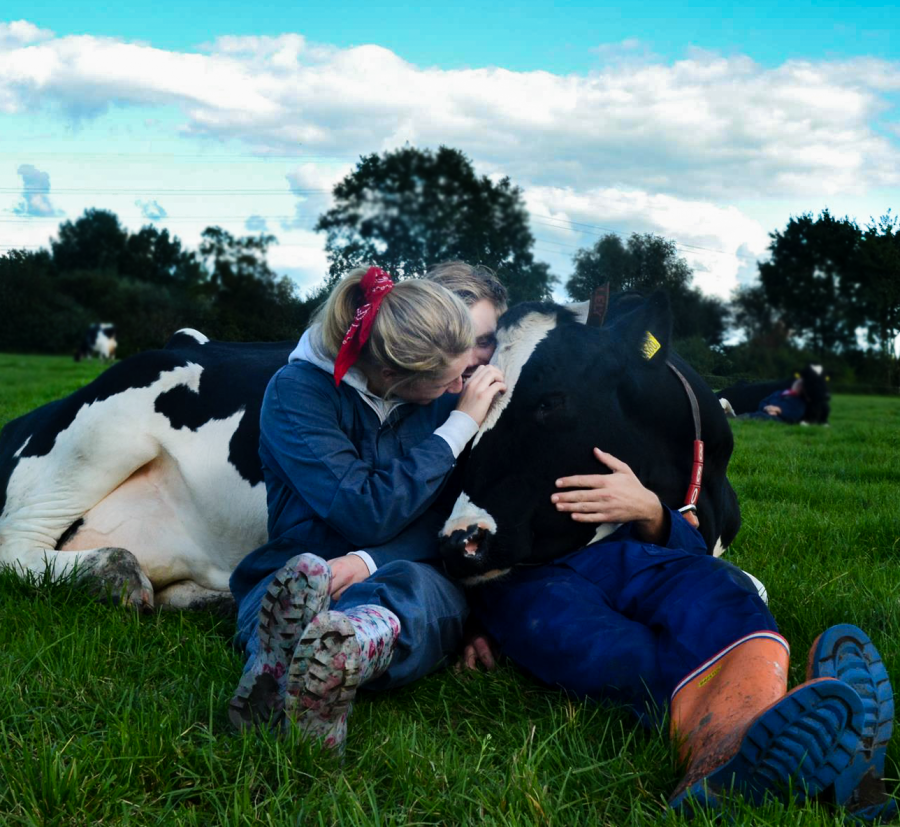 Woman and man cuddle with cow at the Noord Empe farm.

Amid the udder disaster of 2020, where social interaction is limited and physical contact is scarce, there is hope: cow hugging.

Cow hugging, known as koe knuffelen in Dutch, is the latest craze in self-care as it is said to increase positivity and reduce stress by boosting oxytocin, the hormone released in social bonding. Oxytocin dubbed the “love hormone” helps humans create bonds, regulate emotions, and lower stress and anxiety levels.

Cow hugging began in Reuver, a small village in the Netherlands, over a decade ago. The practice has now made its way to the U.S as an increasing number of farmers are offering it as a new form of therapy.

According to the BBC, a cow’s warmer body temperature and slower heartbeat boost oxytocin levels and promote social bonding, creating a soothing and comforting experience.

José van Stralen, a farmer in Spanbroek, a village in the Netherlands, began offering cow hugging sessions in 2014 after learning about it from other farmers.

“It’s a positive energy exchange. The person cuddling the cow becomes relaxed by being next to the cow’s warmer body and sometimes even manages to follow their heartbeat. It’s a win-win situation and great experience for both,” Stralen said in an interview with Insider.

Mandy Hendriks, a Dutch journalist, wrote about her experience hugging cows at the Noord Empe farm, located in Gelderland, a province in the Netherlands.

“I get out of the daily routine for a while. It’s nice just to sit quietly and worry about nothing. It’s quite relaxing,” Hendriks wrote.

At the Mountain Horse Farm in Naples, New York, visitors, with the supervision of a train equine therapist and farm employee, can pay $75 for an hour-long cuddling session with cows.

Suzanne Vullers, co-owner of Mountain Horse farm, believes cow hugging sessions are especially popular among the younger generations due to the effects of technology.

“The younger generation lives and has grown up in a technology-filled world where lots of interactions are via a screen,” Vullers said in an interview with CNBC. “It’s easy to get disconnected from nature and animals, but we need those things to stay healthy and happy. Spending time on our farm where it’s beautiful and quiet and where you can connect with soulful horses and cows can help [with] restoring that connection with the natural world.”

In a study published in Applied Animal Behaviour Science, French and Austrian scientists found that cows indicated pleasure and relaxation when people rubbed, massaged, or petted them.

Though cows typically enjoy the hugging sessions, farmers stress the importance of respecting the cow’s boundaries.They also ask that people do not hug cows unsupervised.

In the desperate search for happiness during the pandemic, cow hugging may be the experience one needs to bring joy, relaxation, and amoosement into their lives.

“People often tell me it meant more to them than they had expected it to. They feel warm, accepted, and loved,” Stralen said.