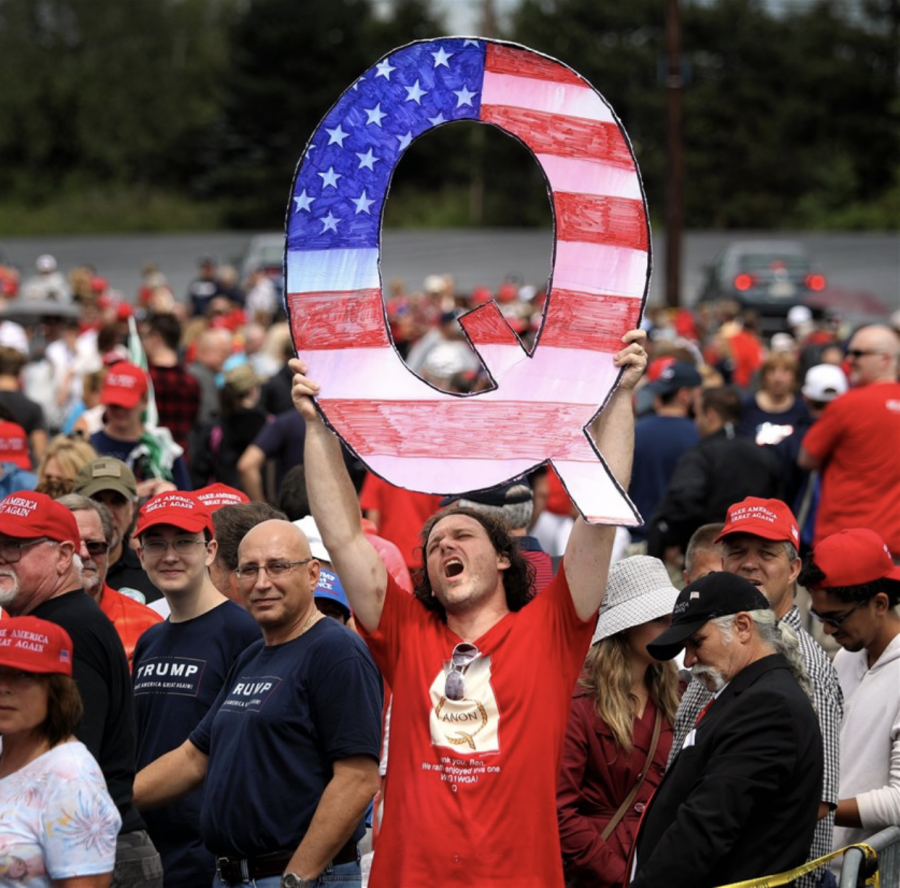 QAnon member at a Trump rally showing his support for the movement.

Recently banned on Facebook, Twitter, Instagram, and Reddit for promoting dangerous conspiracies, the conspiracy group QAnon has taken the internet and the media by storm with their conspiracy that the elites of the world are satan-worshiping cannibals that run a global cabal to harvest children’s blood.

In October 2017, a post from an anonymous account on 4Chan under the name “Q Clearance Patriot,” later known as “Q,” claimed to be a high ranking government official with access to classified information about the cabal.

A recent analysis from the Guardian estimated 3 million people followed various QAnon groups and pages on Reddit, Facebook, Twitter, and Instagram. Since their bans on those social media platforms, the group has dispersed to other areas of the internet, including TikTok. Many users have spoken out against QAnon and warned others on the app to be wary of certain symbols and phrases the group uses. Those symbols include POTUS or The Q (Donald Trump), HRC (Hillary Rodham Clinton), “BC” (Bill Clinton), “HUSSEIN” (Obama), #savethechildren, The Storm, and #WWG1WGA (where we go one we go all).

The core belief of QAnon is that the elites of the world, including the Clintons, Obamas, and other liberal celebrities, are running a global cabal that kidnaps, tortures, rapes, and cannibalizes children for their blood to harvest a chemical called adrenochrome, a chemical compound formed by the oxidation of adrenaline. QAnon members believe that adrenochrome is an anti-aging chemical that will provide a longer life span. However, this theory has been debunked as the chemical can be produced in a laboratory. Although it is not approved by the FDA for medical use, researchers can buy 25 milligrams for $55.

Another central aspect of the QAnon conspiracy is that former President Trump is the savior of humanity and was chosen to save the world from the cabal. During a White House news conference, a reporter asked Trump to comment on the conspiracy group.

“I’ve heard these are people that love our country. So I don’t know really anything about it other than they do supposedly like me,” Trump said at the press conference.

When the reporter explained the premise of QAnon, Trump offered his help.

“If I can help save the world from problems, I am willing to do it. I’m willing to put myself out there,” Trump said.

In an interview with NPR, co-host of the “QAnon Anonymous” podcast and writer for the Washington Post, Travis View spoke about the consequences of Trump’s comments about QAnon.

“The fact that he praised them and he said that he would be willing to help and that he did nothing to denounce the theory or denounce the followers hugely energized them. I mean, they are on cloud nine as a consequence of Trump’s statements,” View said.

According to NPR, since 2018, Q has issued multiple statements on the QAnon Reddit promising that Trump would defeat the cabal and arrest the elites running it. QAnon members called this event “The Storm.” Due to their belief in “The Storm,” the QAnon community expected Trump to be re-elected and use his second term to bring justice to the satanic pedophiles. After Trump lost the election in November, many believers did not lose hope and promoted the false theory that the election results were fraudulent.

The group also believed that Trump would declare martial law to stop Biden from taking office on Inauguration day. When Biden took office, some QAnon members stopped supporting the movement, but others still believe Trump will make a triumphant return and enact “The Storm.”

QAnon researcher Mike Rains suggests that members of QAnon are entrenched in the conspiracy movement because of a cult tactic called love bombing. The group praises one another for being a savior to the people and unknowing the truth.

“One of the biggest parts of QAnon is evangelism. Members feel that they have to get others in the movement to save the world,” Rains said on a podcast. “People get frustrated with their friends and family for not seeing the truth, and that frustration further entrenches them in the movement. They will shower you with support and adulation for the hard work you are trying to do and the hardships you face.”

While “Q” has been silent since the Inauguration, many suspect that it will not be the end of QAnon.

“We’re only now sort of seeing the consequence of this years-long radicalization process. We have not seen the last of QAnon,” View said.